Before embarking on the telling of the tale of “Temptation”, Chetan and I spent a couple of years producing a story that came to be called simply “Zombie”. (The collection is available as a reward in the Kickstarter as well as through Comixology as “I Can’t Help You. I’m Falling Too.”) at the time, I think Chetan was pulling from the relatively recent series of “Marvel Zombies” comics. As well, zombies were everywhere in pop culture. The late, great George A. Romero was making new iterations of his ‘Living Dead’ films and the TV series “The Walking Dead” was swarming audiences who ate it up with gusto! (Sorry.) It got so far as Hollywood producing a movie version of the book “Pride and Prejudice and Zombies”! Truly, something was in the air, so to speak. At that time, Chetan was drawing amazing zombies and mine were, uh… less impressive. I struggled to keep up and to make my zombies as gruesome as what Chetan was effortlessly committing to paper. It’s not like I was unfamiliar with the concept! One of my favourite movies is a weird little gem called “Cemetary Man” or “Dellamorte Dellamore”. It stars a young Rupert Everett as a, well, cemetary man. He starts to notice that the recently dead brought to him are not staying that way. One of the more memorable scenes (of which there are many) is Everett’s character having a heated phone conversation while he casually shoots a teeming hoard of undead Boy Scouts who are knocking down his door! The stunning Lucia Fulci is also in it and the ending is one to ponder.

Yes, so, in our story, we also pulled in a talking gorilla, a tough-as-nails G-man, a rock group who are more than appear to be, all causing grief for the usual cast and the zombies attacking them!

There are other stories packed in the nearly 500 page collection, all of which flesh out aspects of the main characters in TicTocTom. If you support the Kickstarter at the correct level, you will be soon downloading the whole thing for your own enjoyment!

We had fun making the stories and hopefully you’ll share in that when you read them! 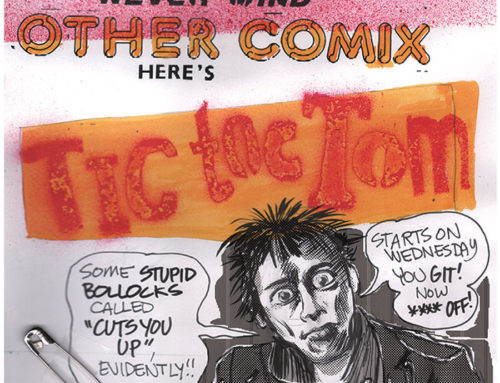 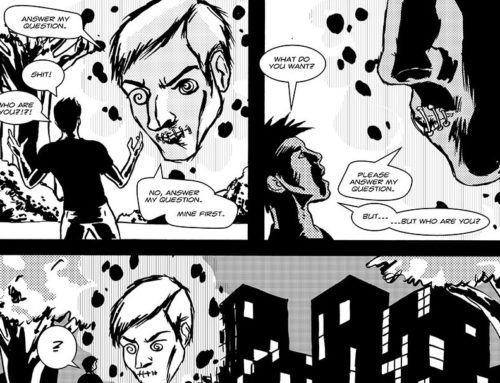 Cuts You Up Gallery

Oh! What a feeling, when you’re dancing on the ceiling! Gallery

Oh! What a feeling, when you’re dancing on the ceiling!