Tic Toc Tom started out in 1992 as a Toronto mini-comic. It’s creator, Chetan Patel, originally intended to produce just one issue. Tic Toc Tom issue one was given away free of charge to friends of the artists and anyone who happened to be interested.

As it turned out, more people were interested than he thought. Just a couple of months later, issue two hit the stands and was an immediate hit. From it’s limited beginnings (Tom was the guy who “blew things up”), the character has grown in both scope and depth as artists were given free reign over their personal interpretations of the character.

Tom has appeared as a nihilist, a super being and of course a scarecrow. And these were not the only incarnations of the character to bloom.

Tic Toc Tom; the book, would eventually open itself up to submissions by the strange, faceless buyers it enthralled. Submissions by fans ranging in age from seven on up to the thirties.  Each adding perspectives which were new and alive with creativity.

How did it all begin?

We’re glad you asked! Join us as we retell, rethink and reimagine the story so far and how this all came to be.

Stewart Building. Walking out I hear a voice, “Hey, you work at Dragon Lady.”

But let’s go back a few months. At the comic shop I worked at on Queen street, I met a guy named Joseph Nanni. Later on I saw him again at the Ontario College of Art (OCA) portfolio review session. I think it was fate.

I remember seeing Chetan at the comic shop where he worked. I hadn’t met him at that point. Believe it or not I thought it was cool that he got to work at Dragon Lady. I worked at Bell Canada during those early years of college. But I would have given that up to do what he did. Which seemed to be mostly hanging around, talking about comics and drawing behind the register. Only in Canada, eh?

Joseph and I both had a love for comic books that others at the college did not. We loved all types of them, superheroes and all. We were not the snobbish art students who only liked the work of Chester Brown. I have nothing against Mr. Brown though. I did at one time own a few Yummy Furs.

It was in high school that I discovered comic books and the people who read them are not highly regarded in ‘normal’ society. I never spoke about them in public. So being able to talk and enjoy them with Joseph was great.

We became very good friends. We talked comics, horror movies and anything “geek”. But only around one another and other geeks. I was still afraid of the “comics are not real art” attitude. Yes, even a college like OCA had that thinking.

Along with Joseph, I met the likes of Adam Wajnblum, Jay Stephens, Alan Hunt and others who had the same love for the comic medium.

I have tremendous respect for Jay Stephens. I always felt that he was one of those artists that discovered their voices early and had the talent to do something with it. I didn’t know him well during school but I remember the first time I spoke to him. It was at Dragon Lady. I didn’t know who he was at that moment but he was checking out the new books like I was. I said something lame like, small press book publishers are so self-indulgent. He was of course a small-press publisher himself so my foot was firmly planted in my mouth. He was nice enough to keep talking to me though.

Fast forward to later that year. OCA first-year students had most of their classes at the Stewart Building on College Street. One day as I walking out of the building and I hear someone call out to me.

“Hey, you work at Dragon Lady?”, said Paul Marhue. Paul was outside having a smoke. I do not recall if he had his classic jean jacket on or not. I do not even remember specifically what we talked about. Alternative comics, self-publishing, etc. and other vague topics. He told me about how he and few others students were thinking of putting together a self-published comic book.

Paul Marhue wonders if this photo will be used in 20 years.

I remember that day very well. I was having a smoke and Chetan was talking to a friend of his. It may have even been Jospeh.

They finished up and Chetan was still outside when I asked him if he worked at Dragon Lady. I knew he did but I wanted to strike up a conversation. I saw him drawing and knew he was into comics like I was so, I guess I was looking to connect with people who liked the same stuff.

Wait! There are even more people here at the college that like comic books? I Thought my friends and I were the only ones who liked them! Thankfully this was not the case.

Through Paul, I met Michael Korditsch. The three of us spent hours at the Grange cafeteria across the street sitting around and talking about art, design, fonts and comic books. And if it wasn’t the Grange we would go into each other’s classes and sit and talk, barely paying attention to the professors and what was going on in the classes themselves. How much did we really learn from those courses? We got a good base of knowledge but it seems we spent more time making connections and getting new ideas for our own work.

The first year as the OCA was called the Foundation Year. It was essentially a year where students were encouraged to take a variety of courses and build up their art ‘foundations’. The idea was that this foundation would support them as they moved on to focus on their own art and design interests. It also meant that there was a lot of fucking around. That’s why we could go into one another’s classes and talk about comics. 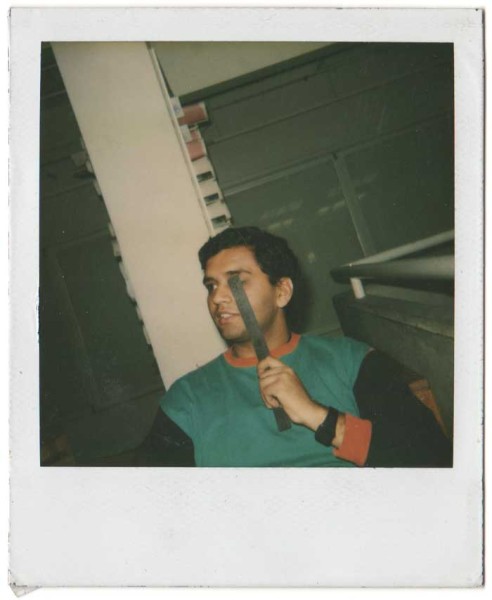 Chetan  in 20 years from now, will wonder if Paul will still be wearing that jean jacket and eating beef patties.

Paul and Mike wanted to put out a magazine-size anthology comic book called Kuhlbox. And I wanted to be a part of it. Together we did six issues of Kuhlbox and one free giveaway. Each was a collection of random stories from artists at the college and there was no editorial restrictions.

Eventually, more artists would come on board. One in particular I met at another local comic book store. He was also a fan of that geek culture, Kenneth Gallant.

Take note, dear readers. You are reading the origin of Walrus Boy.

We hit it off right away. I showed him the first issue of Kuhlbox and he loved it. Introductions were made to Paul and Mike and the rest; as they say, is history.