Life back in the early 90’s was a grand time overall. As a student at the Ontario College of Art & Design I was able to hob knob with like-minded souls, mingle and sometimes muddle my way through classes and stay up late at night working on comic art. I was living on my own at the time and I could remember nights talking to friends like Chetan on the phone at 3am while feverishly in the artistic throes of creating the next Tic Toc Tom adventure.

Tic Toc Tom was important to us at the time and I can remember so many talks and frantic discussions about the direction the character should go in. Ultimately, Tom never did have a definitive direction and I think this is what made him unique as a mini comic. We had something different going on and I think the mission was simple: get a collective going of eclectic tastes and randomly assemble the stories to help shape the world view of Tic Toc Tom.

Some of our influences at the time were artists/writers like Jamie Hewlett, Peter Milligan, Neil Gaiman, Grant Morrison, Brendan McCarthy, Brian Bolland and Dave McKean. These creative souls were formally dubbed the ‘British Invasion’ (by DC) and they were brought over from merry ‘ole England by fledgling Vertigo Editor Karen Berger. Now I won’t say what pages you can see these nods to our heroes in, but flipping through the minis/specials and printed books – one can surely find homages to what these bunch of artists had.

Like I said, we had a grand time back then and we had our own group to reflect the British Invasion. There was me, Chetan, Paul, Adam and Michelle and as an endlessly creative troupe got together and armed ourselves with pen, ink and a bevy of ideas. We managed to get Issue 1 O’Clock of Tom done in record time and before you knew it a revolution was happening.

It turned out to be an adventure of a lifetime and these are the fond memories I have about having the creative freedom and the rush of artistic flourishes in my youth. Tic Toc Tom was definitely a result of that and it is amazing how twenty five years later we are still talking about Tom. 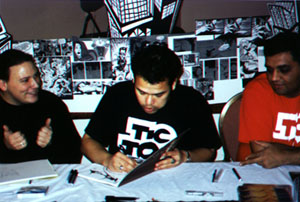 The Spirits of Independence Convention in Kitchener, Ontario, 1995.